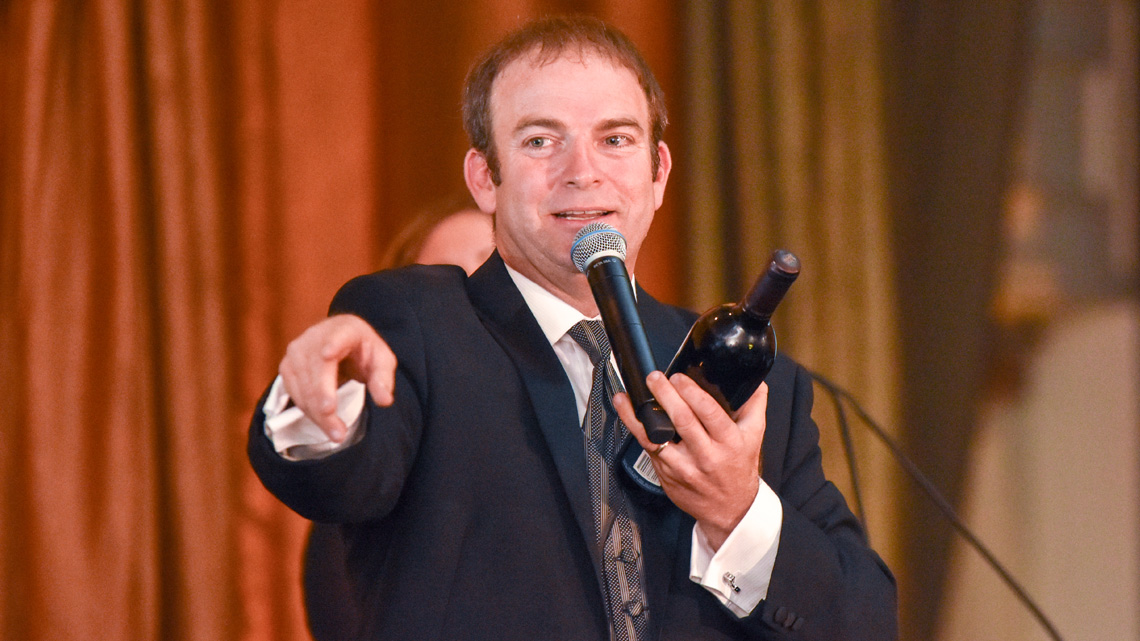 You could call Jason Alpert the accidental auctioneer.

“And they turned to me and said, ‘Do you do auctions?’ and I said, ‘Of course I do auctions.’ I’d never done an auction before.”

But apparently it went well enough that the charity said they planned to use his services again.

That was the start of his new career. Alpert realized that as an auctioneer to charities, it might help them raise more money than they were getting without one.

With the COVID-19 pandemic temporarily eliminating large gatherings, he and his staff of three other auctioneers, known collectively as Alpert Enterprises, have added a new wrinkle to their shows – virtual auctioneering.

And within the Jewish community, Alpert will be performing – he does a lot more than just point and call out numbers – Sunday, June 14 (rescheduled from April 19), at the Menorah Manor Bucket List Gala, a fundraiser for the not-for-profit senior healthcare center in St. Petersburg.

“We had 41 events scheduled over 80 days from mid-March to the beginning of June and almost all of them either canceled or were rescheduled,” Alpert said, “but a handful of them decided to go the ‘virtual’ route.

“So we quickly spent weeks on end figuring out, ‘How do we do this? What’s the best way to do it?’ Our first virtual gala was on March 14. I’ve got six of them lined up culminating with Menorah Manor and I expect there’ll be more scheduled.”

Essentially, it’s the same as an in-person auction, but doing it in front of a camera instead of an audience.

Luckily, his three fellow auctioneers have a background in television, one of them with the Home Shopping Network. So, what they’re doing is sort of a TV show, selling items in front of a camera and getting viewers to bid on items pictured on a screen.

“ Only the technology has changed; it’s much more important doing it this way because the only way you can get donations now is by having them pull up their mobile device,” Alpert said. “Every event has a different mobile bidding platform now.

“Menorah Manor had one they were already working with. They have pivoted to one that has more of a virtual gala concept and have developed a video player within their platform.”

That means when someone is watching Alpert perform on a video screen – a phone, tablet or computer – and an item comes up for bid, he’ll tell the viewer to click on a link that brings up another screen with a “donate” button.

“It’ll be like a webinar; more like a TV show,” he said. “Everybody will be able to watch it but I won’t be able to see anybody and (the viewers) won’t see each other.”

Perhaps the only thing missing, and maybe not, will be the ubiquitous, “But wait, there’s more.”

Jason’s father, Barry Alpert, a director of investment banking at Raymond James Financial Services before he retired, was one of the founders of Menorah Manor in 1985, “so it’s a very special place for me,” Jason said, “and not only because of that. Both my grandparents were there before they passed.”

“So, I have some very happy and some very emotional memories. When I go there now to sit on the committee meetings, I’m going to a place that holds a very special place for me in my heart. I believe that’s part of what has allowed me to be so successful at this event.

“I believe that people can see right through a charity auctioneer who doesn’t believe in or understand the mission. … When I get a chance to work with Menorah Manor it certainly helps that I have such a deep family connection.”

Because of that connection Alpert will hold Bids from the Heart, which are essentially opportunities to just donate and not actually bid on an item to receive. The bids will support the purchase of new beds for the nursing center.

Remember the Lucky Strike “Sold American!” commercials, the auctioneer’s rapid-fire call? Alpert can do that. “It’s what I most often get asked when people hear what I do for a living,” he said. “It’s called a bid chant but I don’t use it very often. In a car auction they’re trying to get through 200 cars in an hour. I’m usually trying to get through five items in 30 minutes. But I’ll bring it out a few times, more for the entertainment.”

The Tampa Bay native and University of Florida graduate with a degree in telecommunications formed Alpert Enterprises in 2005, promoting himself as a host, emcee, public address announcer, live auctioneer and on-camera reporter as well as voice-over talent providing off-camera narration or dialogue for video. His wife, Devani, works in his office. They have 8- and 7-year-old daughters.

It was a long and winding road that brought Alpert to auctioneering. He spent a decade in the southeast as a TV sports reporter, ending up in Miami. When his show there was canceled, he wound up at Homestead-Miami Speedway, planning NASCAR pre-race and post-race shows for three years.

“Then I got offered a job much closer to my house,” Alpert said. “I took it on a Thursday, put in my notice (at the speedway) on Friday, went to my new job on Monday to fill out the paperwork, went back to work my final two weeks at the track. Then I got a call that the guy who hired me had been fired and the job was no longer available.”

He went to his boss at Homestead Miami to ask for his old job back. He didn’t get it, but one of his responsibilities had been hiring the public address announcers. “I told them, ‘I know what you’re paying these guys, I know I can do a better job for you for less money.’ I also used to emcee their local marketing efforts – NASCAR watch parties, festivals … I was comfortable with a microphone and interacting with crowds.”

He got hired, started announcing smaller races and worked his way up to become the voice of NASCAR at the speedway. Over eight years it became his calling card, people hiring Alpert to be the voice of NASCAR emceeing their local events – which led to the one where the auctioneer didn’t show up.

Menorah Manor’s fundraising is different from most charities, holding one gala every five years instead of annually. “They decided they didn’t want to have to go after the same people every year,” Alpert said. “They’re going to ask you to give now ‘but we’re not going to come back to you for five years.’”

The theme this year is the Bucket List Ball. All their silent auction items are going to be in buckets – theater tickets, sporting events, memorabilia collectibles, vacations packages, elegant dinners.

And, yes, even though donors won’t be able to actually place their bids directly in the buckets, they’ll still be part of the gala. Auction participants will be able to see what they are bidding on and the organizers will arrange for getting the items to the winners.

“They already have the buckets prepared for it,” Alpert said. “They’ll still be available on the local bidding platforms.

“And they will still have some live-auction packages that are bucket-list experiences – travel, sports experiences, those sorts of things. So, I don’t think the bucketlist theme is going to change at all. ”